Fish of the Month: Humuhumunukunukuapua’a

Much of the Hawaiian language is so beautiful it stops newcomers in their tracks. Mahalo, kokua, pono, keiki, kuleana—and who would ever be able to forget the oh-so-ubiquitous, meaningful-on-multiple-levels aloha?

Some of the following images share photos of lagoon triggerfish that share the Hawaiian name of which some are not found in Hawaii.  We’re still working on getting better photos of the Wedge-tail or Rectangular Triggerfish that live in our Hawaiian Waters.  Bare with us! But hear the name of Hawaii’s state fish—humuhumunukunukuapua’a—and chances are you’ll be stopped in your tracks in an entirely different manner. 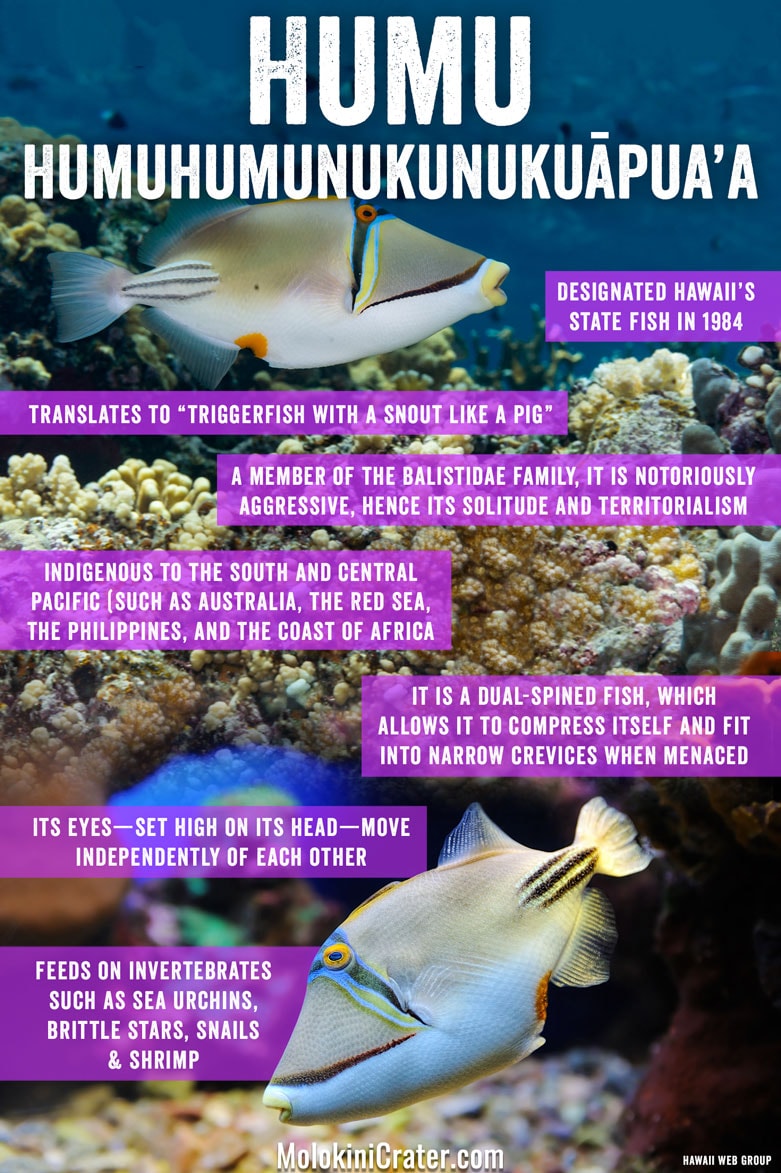 Designated Hawaii’s state fish in 1984, humuhumunukunukuapua’a—or Hawaiian triggerfish—earned its moniker from ancient Hawaiians because of its pronounced schnozzle (the word, quite literally, translates to “triggerfish with a snout like a pig”).

There’s a very good chance you’ll see one at Molokini Crater among other impressive Maui fish. Its pleasing appearance renders the “humu” a marvel to ponder. Vividly striped, with that pug of a nose, it has a voluptuous blue mouth, thanks to teeth of the same color that are set close together. And while Hawaii’s other most notable fish—such as the kumu, or goatfish—might travel in schools small and large, the humuhumunukunukuapua’a often swims through the sea in solitude.

Part of that reason is its innate nature. A member of the Balistidae family, the humuhumunukunukuapua’a may be on the smaller side, but it’s notorious for its aggressive behavior. Intolerant of others in their vicinity—which is often shallow outer reef habitats—they’re known to seek solace alone, just as they’re known to sample other creatures with their powerful jaws when feisty. By itself, the humu’s colors become brighter and its whole attitude healthier—a common feature of triggerfish, whose pallor fades and even becomes drab when threatened, sleeping (which it accomplishes on its side), or demonstrating submission. As for that aggression? It isn’t felt only by other marine animals: it has been known to squawk or grunt when distressed, and bite the ankles of swimmers who venture too close to their immediate environment.  It also shares its Hawaiian name with the Lagoon Triggerfish (R. aculeatus.) Despite the very Hawaiian flavor of its adopted name, that environment of the humuhumunukunukuapua’a’s is not, in fact, originally Hawaiian Island waters. Indigenous to the south and central Pacific (such as Australia, the Red Sea, the Philippines, and the coast of Africa), the dual-spined fish (a feature that allows it to compress itself and fit into narrow crevices when menaced) nonetheless took well to Hawaiian waters, where it feeds on invertebrates such as sea urchins, brittle stars, snails, and shrimp—which the humuhumunukunukuapua’a discovers by blowing jets of air into the water to, in essence, uncover what’s resting in the sand. Its eyes—set high on its head—move independently of each other in a stroke of evolutionary brilliance that allows it to scans the surrounding reef for predators like sharks and moral eels. And that sense of territorialism? It isn’t just reserved for divers of the human persuasion: the species is known to occupy the same area in the ocean for years, building nests that include whole harems of females while the male “wanders” about. (It’s also here that the females lay their eggs before sunrise.)

Science aside, the humuhumunukunukuapua’a is steeped in myth. According to Hawaiian folklore, the fish—which ancient Hawaiians lured into baskets with sweet potatoes and cooked pumpkin—is the spirit of a shape-shifting chief, a part-human, part pig “hog-child” named Kama Pua’a, who was powerful enough to control the rain and ocean. Notorious for pillaging villages with his violence and swine-like behaviors, Kama Pua’a fled to the Big Island where he briefly married the fire goddess, Pele. But Pele—enflamed by his atrocious characteristics—got into intense fights with him, she demanding great flows of lava, he calls for the rise of seawater. After requesting divine help from the underworld, Pele and her coterie of gods, helmed by Lono-makua, forced Kama Pua’a to dive off the edge of a cliff. He became a fish when he entered the Pacific, and to this day, the humuhumunukunukuapua’a’s thick skin is attributed to its origin, in that the hog-child-turned-aquatic-specimen had to grow armor to swim past Pele’s sweltering waves. To that end, when it came to selecting a state fish, the “Picasso triggerfish” seemed a natural selection to some. As Fox News put it, part of its appeal, along with its historic significance, is its “cuteness and unpalatability. The humu won’t be found on a menu (and, as the editor of Hawaii Fishing News says, this is a good thing—popular game fish like ulua could present a problem as the state fish “if environmentalists push to protect the fish from fishermen,” thus impacting the economy); has never, in fact, been considered appetizing. (Even former Governor Linda Lingle pointed out that the humu was once used to fuel Hawaiians’ fires—“not their stomachs.”) Others argued that it was an inapt choice for representation of the islands, in that it’s not endemic to Hawaii. But its rectangular shape, dorsal fin, dazzling shades, geometric patterns, and intriguing qualities rendered it a favorite among survey-takers.

The fish was declared one of the state’s symbols—joining the ranks of the hibiscus (or pua aloalo), Hawaii’s state flower, and black coral, its gem—by default. Humuhumunukunukuapua’a was given a trial basis of five years (and, to note, Hawaiian school children and members of the Waikiki Aquarium rallied for its designation), as fresh-water enthusiasts convinced the state legislature to limit its term. In 2006—sixteen years after the fish formally lost its royal status, though few seemed to notice—it was reinstated as the official swimmer of the state, a title it now holds in perpetuity. And hana hou for that: Humuhumunukunukuapua’a has become a much-loved emblem of Hawaii. Classrooms across the state feature photographs of it. Musicians weave it into their lyrics (listen to Don Ho’s My Little Grass Shack); snorkel companies tout its magnificence. Even the Brits have had a sample of this beguiling beauty when one did a stint at the Hastings Blue Reef Aquarium in East Sussex (which experts described to The Daily Mail as having a “lot of personality…he rushes around the tank, eating and filtering sand always looking like he’s on a mission to get somewhere”). For islanders themselves, the fish captures the whole spirit of Hawaii—independent, stunning, and unique.